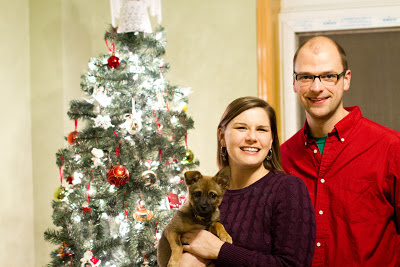 We wish you all a Merry Christmas & a joyous New Year! 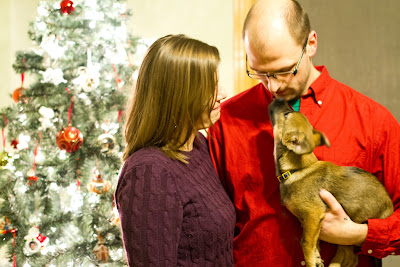 Posted by One Thousand Chopsticks at 10:00 AM 2 comments:

Last night, on the eve of Christmas eve, we hosted a Christmas party for our friends, new and old.  It was an evening filled with laughter and food - lots of food!  I think we made enough cookies to feed an entire city block (especially in China, they're not too keen on sweets). 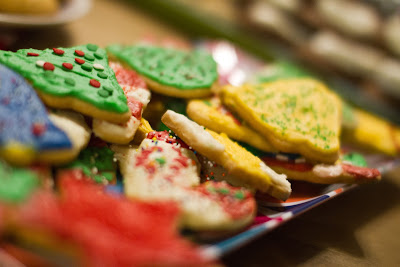 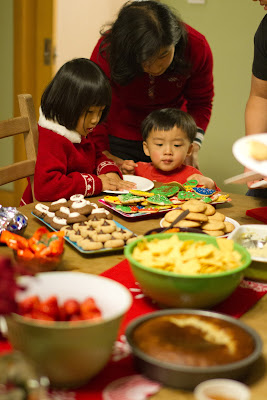 After everyone arrived, we gathered around for a gift exchange game that the Hubby played growing up.  It is all sorts of craziness.  Dice are passed around (we played with three sets), and every time someone rolls doubles, they get a gift and they get to roll again.  After all the gifts in the middle are opened, we went around the circle to share so everyone could see the goods obtained, and then the Hubby set the timer for 15 minutes during which you could steal someone else's gifts every time you rolled doubles.  It got a little physical. :-) At the end of the 15 minutes, some people had 5 or 6 gifts, some had none.  Everyone without a gift stole from anyone with 2 or more gifts.  The best part?  There's no limit to the amount of times a gift can be stolen!  Oh yeah, it got real. 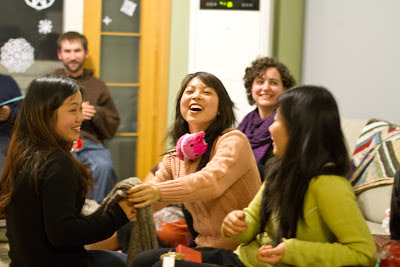 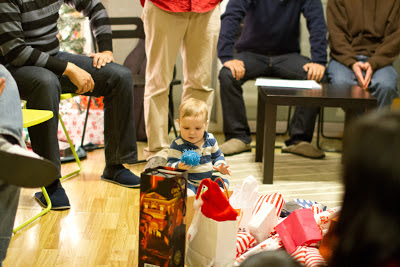 There had to be a disclaimer that the baby was NOT part of the gift exchange.


After the game, we read the Christmas story combining the gospels of Luke and Matthew along with Old Testament prophecy proclaiming the coming of the Messiah. 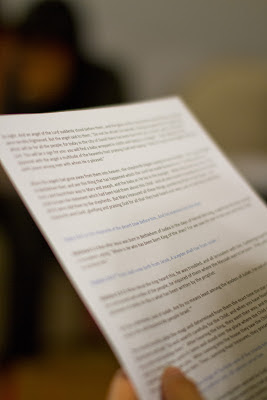 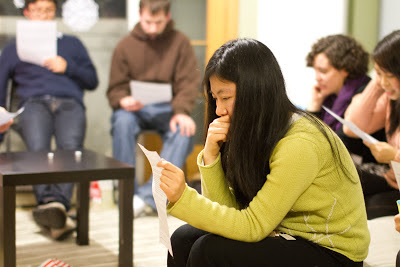 And then our friend got out a guitar and led us in some pretty awesome Christmas carols (if I do say so myself).  It was amazing.  Since we do live in China, we also sang Silent Night in Chinese.  There is something special about worshipping God and celebrating Christ's birth in two languages. 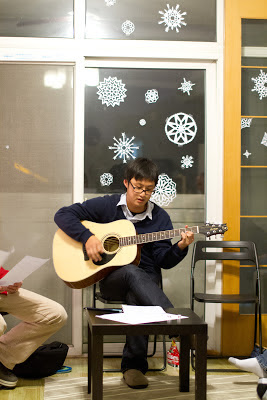 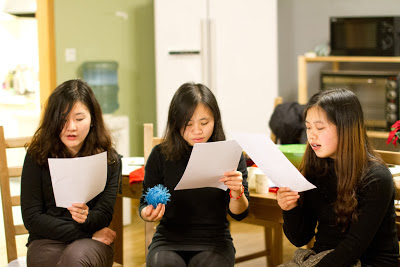 It felt like a true celebration of Christmas.  This time of year is hard for us to be away from all our family and friends back home, but we are thankful for the relationships and new traditions we get to make on this side of the ocean. 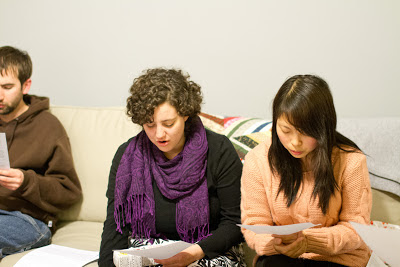 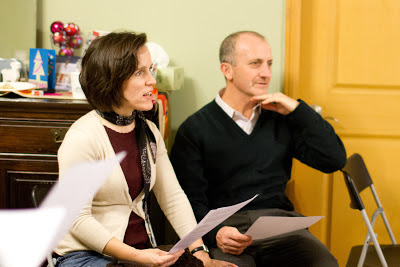 We hope you all have a wonderful Christmas celebrating the birth of our Savior!  It is such a meaningful time of year.  May the Lord bless you and may the Light of the season shine in your hearts, your homes and bring you joy throughout the year to come!

Today, my friend K and I went to get our hair cut.  I have been loooong overdue to have mine cut and I was grateful for the company - on a new adventure, it is always nice to have someone to laugh with.  Because, let's face it, every adventure in China has something crazy to it.


Instead of boring you all with a step-by-step walk through of our experience, I thought I would share the highlights of the observations and lessons we learned today.


1) I know just enough Chinese to get myself in trouble.  Right after we walked in and established that no one else spoke English (there actually was a few that did, but they were too embarrassed to speak up), we were trying to figure out the price difference in hair cuts (explained next).  I didn't know why one was more expensive than the other, so I pulled out my iPhone and opened the "Say Hi Translate" app.  Supposedly, I can talk to the app in English and can have whoever speak in Chinese and it will translate the conversation back and forth.  That did not happen.  Instead, I told the lady helping us that my phone can translate and can she speak (see, just enough Chinese to get in trouble).  She spoke into the app and...well...I'm not sure what she was trying to say, but the app translated the word "rape".  Shocked, I tried to recover but couldn't.  I was laughing but trying not to.  My friend looked surprised and I think we were both a little confused.  I'm pretty sure that wasn't what she was trying to say.  I had her try again and this time she said "Do you understand Chinese?"  Point taken.


2) After communicating we wanted hair cuts (and not just a wash, a perm or color), the lady at reception gave us four price points.  15, 30, 68 & 108RMB.  I still don't know the difference.  After the aforementioned fail, we just guessed - I went with the 30RMB cut and K chose the 68RMB one.  During the process of getting our hair cut, I kept watching them cut K's hair and mine and was trying to figure out if they did anything different.  They used no products in my hair.  In Kristan's hair they used a little wax at the very end.  We both got our hair washed, cut and styled...hmmm...what was the additional 38RMB for?  I'm not sure either of us really know.  Our only guess was maybe K's stylist was more experienced, but we really have no proof of that point.


3) We both brought pictures and I think that helped in the overall outcome.  Both of us had men cutting our hair (very typical in China I think, almost every salon I walk past has guys working), mine looked at the picture I brought of Sandra Bullock's 'do about 20 times.  In fact, he combed my hair out and re-parted it for 10 minutes before he even started cutting.  And then he kept asking for the picture and studying it.  I would say that mine did not turn out quite like the photo - but he got the general idea.  Not as many layers as I would like, but still, not a blunt cut and I didn't feel he tried to make it Chinese. K on the other hand, reported that her stylist thinned her hair quite a bit.  She does have thick hair (more so than mine), and thinning is typical in Chinese hair styles, at least from former experiences of mine.  Anyways, the picture helped.  Even if the end result varied.


4) Discount cards are popular.  As we were leaving to pay, the same lady who helped us when we first walked in met us at the register to pay.  She was trying to convince us to buy a discount card.  The card cost 500RMB and was preloaded with that amount.  Each time you use it, you save 20 to 25% or so.  Anyways, neither of us brought that much cash so we declined.  After I explained to her that maybe next time we'll buy one, she started all over again explaining to K.  It was funny.

5) Some things are better about Chinese hair salons.  For one, the chair they use to wash your hair is really, really comfortable.  My neck and back didn't hurt at all, which I feel is typical in America.  It was basically a recliner with an extra pad in the sink for your head (so it's resting on something, not dangling over the edge).  They also had lockers we put all our stuff in and got a key to.  So nice!  I didn't have to carry my purse or coat around with me.  Yay!  They even gave us hot water to drink. 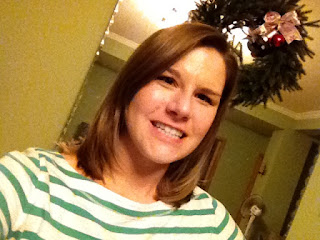 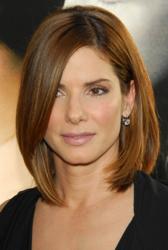 So, what do you think?  Did he get my hair right?  Overall, it was better than I expected.  And I only paid $5!  Whoo-hoo.  Although I guess I could've paid $3.50 if I had bought that card...oh well.  Maybe next time.
Posted by One Thousand Chopsticks at 9:56 PM No comments: