"Zhuangxiu" (zhoo-ong shee-oh, 装修) literally means "to fit up", as in, to fit up a house. Or as we would say, remodel. In China all the apartments are concrete boxes, so when one wants to zhuangxiu an apartment it involves a lot of jack hammers and obnoxious drilling.

Two weeks ago, the family two floors above us started this process on their apartment. And if the loud noises and constant shaking from the jack hammers isn't enough, our stairwell is filled with clouds of dust and cigarette smoke from the construction crew. Not to mention the level of activity going up and down the stairs has increased dramatically causing Samson to bark loudly and often. Poor Atalie can hardly get a nap in, and I feel like I'm going crazy with all the noise. 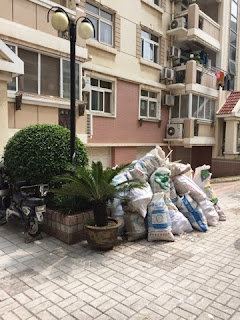 This is just one of those things that is part of life in China. Thankfully, the construction is limited to working hours and there is usually a two hour break for lunch around noon. It could be worse. But it still drives me crazy. My amazing Ayi went upstairs and asked them to be quiet between 12-2 so Atalie could nap well at least once per day.

The amount of stuff that comes out of the apartment is amazing! We've seen woodwork, flooring (with the nails still in it), and bags of debris piled up downstairs everyday. Some of the salvageable things they probably sell or use in another apartment they own. The bags of debris will sit there until they arrange for it to be picked up. It's unbelievable the amount of mess it creates as they cart it downstairs. And they don't clean up after themselves.

We're surviving. Today is supposed to  be the last day of construction. Then it's just a matter of time before another neighbor decides their place needs some
updating
Posted by One Thousand Chopsticks at 2:57 PM No comments: