Have child, will travel - our week in Guanxi province

We recently took a trip to Guanxi province in Southern China, an area of China we have wanted to travel for a long time. Besides our trip back to the States over Christmas, it was the first time we really traveled with Atalie. And, it was the first time we have traveled together in China since moving here (trips to Shanghai excluded). Both Steven & I have made a few trips around China with friends in the three years we've lived here, but never together. I was excited to get out of our city for a bit and see a new side of China I hadn't experienced before. Plus, we would get to spend a whole week together!! That, in and of itself, is always the best reason to get away together.

Our trip overall was amazing, we had some high highs and some low lows. Kind of like the mountains and rivers of the places we saw. I want to share more about Yangshuo in a separate post, but here I'll post some highlights & some hard spots.

Highlight 1: Liuzhou
We got to visit our friend's hometown! Liuzhou is an ancient city with 18 bridges connecting the two sides across the river. Our sweet friend, Joy is from Liuzhou and it was fun to have her as tour guide. We got to see the riverfront, pick up a Starbucks mug (my souvenir of choice whenever we travel), and spend time with her family. Liuzhou is in the mountains and it was cool to see green and mountains peaking up through the city scape. The city also has a very different feel from what we are used to in Nanjing. Even though this time of year the temperatures are relatively the same, the people in Liuzhou dress more casually (women weren’t wearing hosiery, even in the heat of summer in Nanjing they all wear nylons) and it has more of an island or tropical feel to it. It was fun to see and experience!


Liuzhou is in the mountains. I know. I already said that. We flew into Guilin, arriving at 9:30pm, and then we took the airport bus to Liuzhou...through the mountains. For two hours. That first night we didn't get to bed until 2am. The roads weren't in excellent condition either and bumpiness of the bus and the tired condition of the travelers made for an uncomfortable ride. We were traveling with another family who has two kids (1 & 3 years old). Considering how much time we were on a bus, the kids did great! Oh. We had our moments, like the day we left Liuzhou, traveled back to the airport at Guilin, picked up the rest of our traveling party and then took a private bus four hours in another direction into the mountains. One kid got sick, several adults were nauseous, and parts of the drive were a bit frightening. But we made it! We did it! With kiddos. High fives and fist bumps for everyone!

Highlight 2: The views!
Oh my. I have never seen more beautiful scenery in China. We really traveled off the beaten path, but it was gorgeous. To be surrounded by God's creation again was nourishing to my soul. Watching the mountains pass by outside the bus window made the long hours bearable. And the places we stayed had amazing views. After Liuzhou, we went to Jinxiu, an all inclusive Chinese resort village in the mountains. There was nothing else around. We were tucked in against a river and mountain sides. The air was clean & oh, the stars! Lovely. After Jinxiu we got back on the bus and spent our last two nights in Yangshuo. Amazing views of the mountains from our hotel. I didn't realize how much I missed the mountains.

Hard Spot 2: Hard beds & squatty potties
At Jinxiu, our hotel was not what us spoiled Western travelers are used to. Actually, I’m not even sure how many Westerners had ever been to the hotel we stayed at. All the American kids attracted quite a bit of attention, Atalie included. At one point, she took pictures with several Chinese in a row! All it takes is one person to ask and then all their friends want a photo with the little white baby, too. I always wonder what they do with those photos…anyways, I digress. So the hotel was a bit off the beaten path, I won't go into details, but at first we were given a room overlooking the river with no A/C. Thankfully, one of our friends traveling with us negotiated with the manager and got our family and themselves rooms in the main building. So, we got the A/C, but with it came very hard beds and a squatty potty with shower combo! I share this as a hard spot because the second night I was already sore from sleeping on the bed the first night and could hardly sleep. But at least I wasn't sweating!! I'm glad I didn't know it would be like this. We just all had to grin and bear it. When traveling in China, it is best to be flexible and willing to go with the flow. We brought our own travel bed for Atalie, she definitely had the most comfortable place to sleep.

Highlight 3: Taking Atalie swimming
At Jinxiu, we went swimming with Atalie in the river and our hotel in Yangshuo had a swimming pool. She loved it. I'm so glad she enjoyed the water! It was fun to splash around with her and I'm excited for when our pool here in our complex opens on July 1st!!

Hard Spot 3: Sickness
The day after we got back I was really sick. I finally threw up and then felt better. The next day, Steven got sick. Then, Atalie had diarrhea. That's what happens when you travel! We think we pinpointed the culprit, but it's not unusual to get sick when traveling in Asia. Thankfully, it was after we got home and not while on the plane!

Highlight 4: Yangshuo
The last two nights we spent in Yangshuo at a place called The Giggling Tree. I'll share more in another post, but this was definitely the highlight of the whole trip. It was a little oasis in China, good food, comfortable beds and gorgeous scenery. I hope we go back someday!

I actually don't think I have a fourth "hard spot" to share. More highlights than hard spots! I’ll take it. Overall, it was an amazing week and we enjoyed time together as a family and the time with friends. I would travel again with them all any day - especially with kids! :-)

Posted by One Thousand Chopsticks at 4:36 PM No comments:

Things we see on the subway

I don't know where to start? The man purse? Athletic glove? Dead fish in a garbage bag? This guy has it all! 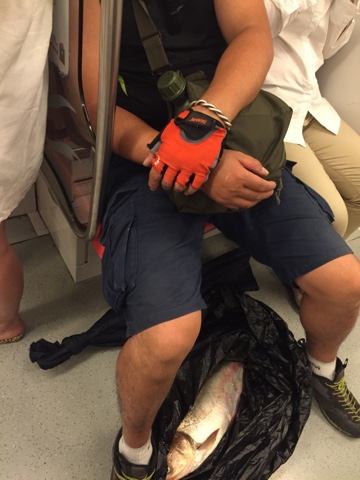 Posted by One Thousand Chopsticks at 2:51 PM No comments: